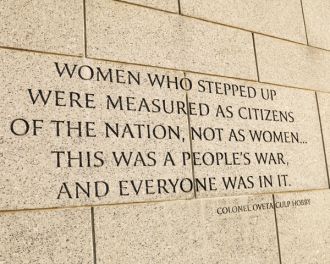 Women's documented military service usually commences with the 18th century American Revolution, likely a reflection of the availability of primary source historical information. Beyond the usual demographic information, is the broader context of related societal and institutional issues that provides insight into what impacts a servicewoman's and veteran's day-to-day experiences within military and veteran organizations.  A select few of these influential factors include gender and cultural norms and values, laws and policies, federal agency progress to open occupations, provision of comprehensive health care and rehabilitation to include gender-customized prostheses, production of a full complement of female uniforms including combat personal protective equipment, and full access to housing, employment, and other services and benefits.

Tell your story!  Your history preserves the past and informs women who choose to serve in the military and others invested in their success.

What We Don't Record, We Lose!

The Women In Military Service For America (WIMSA) Memorial is the only major national memorial honoring all women who served in our nation's defense throughout history. Their patriotism and bravery are a part of our nation's collective heritage and are finally recognized in the Memorial through exhibits, film and the Memorial Register, which guarantees each registered woman's individual story a permanent place in America's history.

Some 3 million women have served in defense of our nation, since its beginning nearly 250 years ago. The individual histories of more than 258,000 of these women come to life in the Memorial Register. The Register is an interactive computer database that allows Memorial visitors access to military histories, photographs and memorable military experiences of registered servicewomen. However, registration is NOT AUTOMATIC.

If you are a servicewoman, or know of a servicewoman, past or present, please help preserve this important and long overlooked portion of history by completing a registration form today for yourself, a family member or friend. Every woman's story is important and any information is better than no information. It is individual experiences that make up America's collective history. Make sure the story of women serving in defense of our nation is recorded and never forgotten.

No donation is required to register, but your support is crucial to keep the doors of the memorial open.  Preserving your military service heritage is the mission of the national memorial.  Your assistance is much appreciated!

In 2000, the United States Congress with unanimous support created the Veterans History Project (VHP) through Public Law 106-380, sponsored by Representatives Ron Kind, Amo Houghton, and Steny Hoyer in the U.S. House of Representatives and Senators Max Cleland and Chuck Hagel in the U.S. Senate.  President William Jefferson Clinton signed the law on October 27, 2000.

The mission of VHP is to "collect, preserve and make accessible the personal accounts of American wartime veterans so that future generations may hear directly from veterans and better understand the realities of war.

Anyone or any organization interested is welcomed to participate in this project.  Process guidelines and forms are provided.

In addition to the "Women in Military Service for America (WIMSA) Memorial Foundation, Inc." and Library of Congress "Veterans Legacy Project," there are efforts to collect women's military histories in states, colleges, and other venues.  When found, these registries will be listed below.

The Library of Congress prepared this unique heritage calendar to commemorate 'the achievements and activities of American women in the armed forces between 1760 and 1998. Notable achievements or milestones are reported, typically in relation to a person's date of birth or death, the date of her particular achievement, or an influential event in the lives of military women. The calendar aims to show the diversity, breadth, and depth of women's experience in the United States military. Achievements of women in all branches of the Services are depicted, and both individual and service -wide milestones are noted. The calendar also includes Federal and other holidays.' It includes a project description, bibliography and other web sites. Local reproduction is authorized and encouraged. (Accessed online April 23, 2016)

Women in the Military in the Americas:  1775-Present

This article reviews women's roles in the military in the Americas, particularly in the United States and Canada, from the American Revolutionary War to modern times. It contains links to many other historical articles exploring many facets of women's military service. Wikipedia is open to public edit. Their policy states: "Content that violates any copyrights will be deleted. Encyclopedic content must be verifiable. Work submitted to Wikipedia can be edited, used, and redistributed—by anyone—subject to certain terms and conditions." (Accessed online April 23, 2016)

This U.S. Army timeline depicts key events from 1940-present for women serving in the U.S. Army. Other timelines at this site include: Early Soldiers, Nurses, Pilots, WAAC/WAC and New Era. (Accessed online April 23, 2016)

In addition to her historical review, Jaclyn Ries explores the long tradition of sexual violence against women in the U.S. military by their military peers.  She suggests that one reason may be the link to the history of women's secondary and service-oriented relationships to men, not only seen prominently in the military, but also very prevalent in American society.  These factors may contribute to a cultural climate encouraging and supporting the objectification of women in the military, as well as male violence against them. (Published November 7, 2011) (Accessed online April 23, 2016)

The Colonial Williamsburg Foundation developed this timeline. Its "mission is to be a center for history and citizenship, encouraging national and international audiences to learn from the past through the preservation, restoration, and presentation of 18th-century Williamsburg and the study, interpretation, and teaching of America's founding democratic principles." (Accessed online April 23, 2016)

This Veterans Administration (VA) report chronicles the history of women in the military and as veterans, profiles women Veterans and how they utilized benefits and services in 2009, and examines how they might use VA in the future. (Accessed online April 23, 2016)

This Department of Veterans Affairs (VA) Office of Policy and Planning publication is a 18th-21st century historical overview of military women's integration into the military and the VA health and benefits administrations. (Accessed online April 23, 2016)

Captain Barb reminds us "that women are veterans, too!" Her site offers a menagerie of stories of women who served their nation in a variety of roles...some well known, some not. (Accessed online April 23, 2016)

The Department of Veterans Affairs (VA) Center for Women Veterans maintains this timeline.  It depicts key events and laws shaping the VA's development of staff, programs, and policies impacting women's health care within their agency from 1980-2014. (Accessed online April 23, 2016)

This Veterans Administration (VA) report chronicles the history of women in the military and as veterans, profiles women Veterans and how they utilized benefits and services in 2009, and examines how they might use VA in the future. (Accessed online April 23, 2016)

Military Sexual Assault:  A Detailed Timeline of Sex Crimes in the Military (1979-2017)

Andrea Januta published this timeline in The War Horse.  She states:  “This ongoing project examines nearly four decades of military sexual trauma in the U.S. military in an effort to understand the broader context in which the Defense Department has allowed a culture of sexual harassment and abuse to continue. Using government documents, historical records, news of the time, and additional reporting, this timeline illustrates not just the scandals, but the public, legislative, and military responses, as well as the evolution of the Defense Department's policy regarding sexual abuse.

We need your help to chronicle the history of military sexual trauma in the U.S. Armed Forces and how it's been addressed by the U.S. Defense Department.

Contact newstips@thewarhorse.org or message us on Facebook with tips, articles, and documents about scandals you think should be in this history.”

This timeline is part of The Huffington Post's series on women veterans experiencing homelessness.  It provides a snapshot of who, why, and how homelessness became and continues to be a challenge for some women with military service.  This map is a collage of true stories.